I have realised that blogging takes a lot of time, so does facebook, and all of that crap. It’s like trying to keep up with friends. Sometimes you really want to, but there just isn’t time to have all of these people in your life.

I had drinks with an old friend last night and it was excellent to catch up. He gave me an interesting quote. “If my friends were plants, they would be dead already”. I think I am much the same. Except I think with good friends, it doesn’t really matter how much you see them, because when you do, there is always that connection. Maybe only the acquaintances drop of and die. However sometimes I do feel very nostalgic about the people that have passed through my life.

I’m pretty appalling when it comes to time management, so this nostalgia never really motivates action. I constantly have a big list of things that I should be doing, but they usually all get forgotten and I work on writing or music. There is probably some divine balance between life and art, but I am yet to find it.

In other news my friend Ricky took some photos of me the other day, for promotional stuff etc. I like them, I don’t really like the shots with the guitar in them, but Ricky says that I’m a musician and that I should shut up. He is probably right and I think his photos are amazing.

Today was my first day back at work after the Knee Chin holiday/tour. Which definitely wasn’t really a tour, but it was fun and a learning experience all the same. I will post a tour diary soon, I am currently just waiting on the photos from Callum.

Anyway, to the point. I went to work today feeling like I had made my decision. I was going to give the new role, a three month trial. However after arriving at work this didn’t seem right. Then after having a discussion with one of the HR ladies, I was feeling pretty sure that things could never really change and that the only way to solve things, would be to escape before the building collapses.

I decided to get back to work, however while trying to work Cat Stevens told me ‘you may be here tomorrow, but your dreams may not’ this compelled me to make a decision, so decided to source a magic 8 ball. However as one was not readily available, I was prompted to download the app on my phone. I proceeded to question said app, three consecutive times, well actually four.

So there you go, I should quit my job and the outlook will be good. So that is what I am going to do. I will tell the boss tomorrow morning. Unless I chicken out and change my mind. Oh glorious indecision.

I will keep you posted.

In case anybody is wondering, I actually wrote the following post yesterday. So when I say today, I actually mean yesterday. I understand that this is not going to affect anybody, however I just felt that If I didn’t write this disclaimer I would confuse people, however I am now thinking that I have just confused myself.

So…..the partners at work have finally gotten back to me and have decided to give me what I want (i.e. less responsibility). My reply to this was “I’m not sure if I want that or if I would rather just resign, can I please have the week to think about it?”. So that’s what I am doing. If anybody would like to provide me with some profound advice, please feel free.

Today I am also working, on the first day of my annual leave, now that is dedication. To go along with my thinking, I have quite a big week ahead. Mainly because Knee Chin are going on tour. It’s only a small 3 show jaunt to Newcastle and Sydney, but I am quite excited. Mainly because I get to have some time off and play in a band that I really love. This is an interesting concept for me, as previously being in a band in which I wasn’t the main songwriter really got to me, as I felt I should be focusing on my own work. With Knee Chin this isn’t the case. I think it’s probably for a couple of reasons, firstly I love the guys. I enjoy practice and shows just because I get to hang out with friends. Secondly of course is the music. I love Aidens songs, and I love how we write together as a band, it feels free and easy and we don’t really have to think, we just play and it works. Well at least I think it does. The best thing is that we don’t tell each other how to play our instruments.

In other news….yesterday I had a photoshoot with my friend Ricky. It was interesting, I feel uncomfortable in front of a camera but he made it feel really natural cause he would just talk to me and I would forget that he was taking photos. I really love his photos, but we are both thinking that they might not really suit my style. I don’t really know. But it was a good experience all the same. After the shoot we went for Korean BBQ, it was really good but I ate way too much. 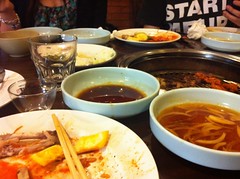 Today I feel a bit sick, maybe it was the food, maybe its just the weekend catching up with me. Speaking of catching up with me. I put my car in for service today, and I just got it back. Turns out that it will cost $570 to fix its various problems, the big problem is that they can’t do it prior to the tour. So fingers are crossed that my car doesn’t die on the way to Sydney.

This is my friend Ricky. He is working late again and funnily enough so am I. Today was characterized by rookie mistakes, as I was extremely tired. We also had a reflections meeting this morning. Which is basically where we reflect on how much we hate our jobs and whine about things that will never change. I am very good at this.

So good that last Thursday I quit my job on a whim. I don’t have another job to go to, or any real plan in place, other than spending more time on art and less time stressing about things that mean nothing to me. Most people in my life have expressed that this is a bad choice. They then continue with the standard lecture about how I need to face reality. Let me say, they are probably right. Thats fine, but I have decided that I will let reality catch up with me and deal with the consequences then. The only hick-up was that while quitting my boss told me that he would like to keep me on and that he was willing to reconsider the type of work I do, etc etc etc (it would take to long to explain). Anyway he is supposed to get back to me with a proposal as to whether any of this could happen, but at this point I am still awaiting my fate. Either way, I’m 100% sure what I want, so this all just adds to the confusion.

So back to the meeting. Because of, all of the above, I tried to pull back in the meeting and not bitch and moan. It didn’t really work that well. However I did come out with this. 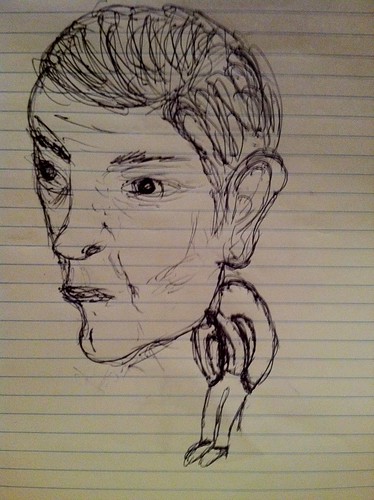