So….. It has been a long time between posts. I will give you the short version.

I really didn’t need to use dot points. But many wonderful personal things have happened between those things. All mixed with my general fixation on bullshit.

Not really into Christmas… so thats all I’m going to say about that, but I am off work for two weeks, hoping to finish the songs for my next album and try to relax.

Speaking of relaxing, I have been fishing 3 times in the last 3 days. Never really catch much.

Trip 1: Large Toad/Puffer Fish – Nick tells me that this is not a fish and is therefore counted as negative 1 point.

Trip 2: Poolie catches a large rock. As seen below. 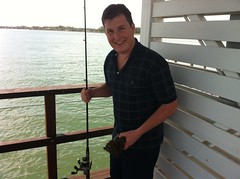 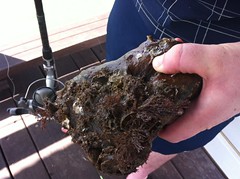 Trip 3: Caught a tiny Bream and two toad fish in the cast net. Got bored and decided to feed the fish with the chicken breast we were using as bait. Just a side note on that, the use of chicken as bait was my Dad’s idea. He says that its cheaper and better for bait than prawns, I am yet to be convinced. Its just strange trying to ‘catch dinner’ with what would have been a fine dinner in the first place.

The interesting thing that I did find out about chicken breast however is that it is much better for skimming than rocks.