My friends/band mates are moving out of their house tomorrow so Poolie and I went around with a bottle of Mead.

Here is a photo of nick with a mirror. 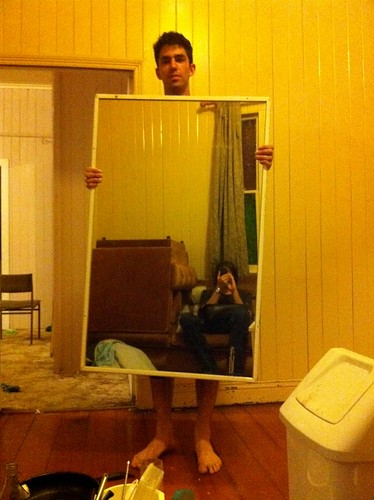 In our boredom we decided to have some fun with a lyric generator, I have not laughed so much in years. Here are the results. We are thinking of using it for a Knee Chin soundcheck sound. Its amazing what the internet can do. Name your band, write songs for your band and many more.

The Tale of My Jewish Librarian Friend

It began on a Sleepy Saturday Midday:
I was the most Crazy Didgeridoo salesman around,
He was the most Jewish Librarian.

We used to Clean so well together,
Back then.
We wanted to Fuck together, around the world,
We wanted it all.

But one Midday, one Sleepy Midday,
We decided to Fuck too much.
Together we Fucked a Hand.
It was Clean, so Clean.

From that moment our relationship changed.
He grew so Drunk.

And then it happened:

The next day I thought my Knee had broken,
I thought my Chin had burst into flames,
(But I was actually overreacting a little.)

But still, he is in my thoughts.
I think about how it all changed that Midday,
That Sleepy Saturday Midday.

Generated by some lyric generator thing.

That made me cry it was so funny.

If people actually read any of my babble, please comment, I need gratification, I need to feel loved etc. (Can’t you just hear my Violin music?)

So I was going to post regular updates while on tour, however as I was doing all of the driving this was not really possible. So I saved it all up for one big post.

I have included photos and some videos, most were taken by Callum. Other for any bad photos lets just blame my phone. Callum took many more photos and has included some lovely captions under the photos on his flickr so if you are interested have a look at http://www.flickr.com/photos/callumwheeler/sets/72157625415178228/

I apologise for any spelling or grammatical errors. As you are aware, these things are not my strong point and it I was to thoroughly proof read all posts, I would die. So once again, corrections are more than welcome.

So here we go.

I wake at 3am, after an early night of furious packing. I have a bit of problem when it comes to packing, as do most people, however I choose not to use the simple list method to solve this problem.

Callum and I quickly drive over to Nick and Aiden’s house to get going, and are greeted by Aiden with a beer in his hand. It turns out that he decided not to sleep. He then offers us all a steak and we sit down to eat some steaks and steamed vegetables at 4am. This is a usual breakfast for me, but never this early.

After a bit of a drive we reach the lovely Big Banana. It is a big Banana however they still seem to be over compensating wit the laser tag, paint ball, toboggan rides, the worlds biggest jigsaw puzzle and ice skating which all over shadow this wondrous concrete banana.

Moving on, we decide to stay at Nambucca heads for the night and upon our arrival decide to partake in the $5 lunch special at the RSL. A pie & chips with mushy peas and gravy. Mmmmmm it makes me feel tired and ill just thinking about it. But I’m sure I will get used to such delights on this trip. Which brings us to dinner, all you can eat pizza for $15. Sounds good but tastes bad and Aiden nearly vomits at the table after eating an inconspicuous anchovy. 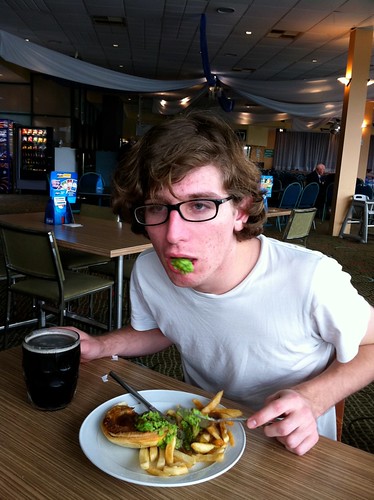 In between these two lovely meals, we did some fishing. Where I caught an undersized bream and a massive toad fish, and we spoke copious amounts of shit.

Waking up in a tent always makes me feel like I have just had a massive night out, just the right level of seedy. Today we have our first show in Newcastle. There are a few bands playing so the show starts at 3, we don’t actually play till 8, but we want to get there early and catch all the other bands.

We stop in Fredrickton for an amazing breakfast then continue on to Newcastle. After setting up the tent at Stockton we catch a ferry across to Newcastle and the show. Which we run for and still miss.

As it was our first show out of Brisbane we decided to celebrate with a few beer’s (Toohey’s Old). Unfortunately by the time we played the three of us had had just a few too many olds. We then continued to play a perfectly sloppy set which was characterised by Aiden’s glasses falling off. The crowd seemed to enjoy it so that was a bonus.

After the set Nick, Callum and I walked back to the ferry partaking in some late night KFC on the way, where I tried my hardest to convince the girl behind the counter to read Walden by Henry David Thoreau, but she wasn’t interested. After a long walk back to the tent we went to bed. Apparently I was up later talking gibberish although I don’t remember this.

To start with a quote from Mark Twain “God made the harbor….but Satan made Sydney”. I found this quote in a Mark Twain’s book ‘They Wayward Tourist’ which I picked up in a second hand bookstore in Newcastle just before we drove to Sydney.

Driving in Sydney is hectic and after getting lost numerous times we found the house we would be staying in, tucked away in a mass of terrace houses. It reminded me of so many of the share houses I see around Brisbane full of musicians and it seems to me squalor may be the new aesthetic when it comes to musicians. In saying this however, our hosts were lovely people and were very hospitable.

After unloading our belongings we started our journey through the back streets of Sydney collecting the gear for the show. This is the typical thing that happens to me in Brisbane, I call it the curse of the car. I was amazed to find out that none of the people that we were staying with actually owned a car and that they get there equipment to shows on trolleys. Hence they tend to play quite close to home.

After dropping off all the gear we went on a mission to Newtown for some Pho Tai (Vietnamese beef noodle soup. i.e. my favourite food). We were recommended a place, and after my first tasted of the soup I decided that it was quite bland. Please note however that I regard myself as some what of a connoisseur when it comes to Pho. I proceed to add more Hoi Sin sauce to my soup and that is when the trouble started. The sauce seem to get clogged in the end of the nozzle, so me being the intelligent person that I am decided to squeeze the bottle harder. Just to laugh in my face the lip popped off leaving Nick and I splattered with sauce and my soup just a little to flavoursome. 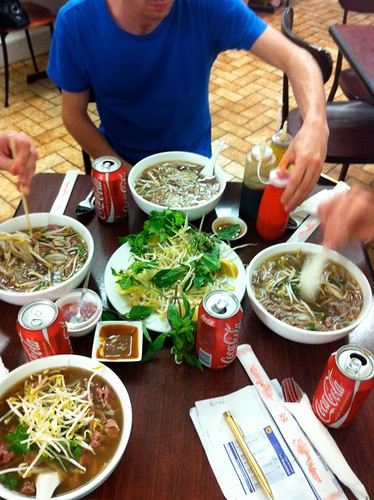 The day had seem to have caught up with me and I became quite bitchy, but off to the show we went. We were originally suppose to play first, then second last. However due to the headline bands old age and busy work life’s, we ended up playing last at 1:30am. So what looked like a promising packed show at 9pm turned into 8 people, not including Callum and us playing the best set that we can remember.

Due to our new found weariness headed to the 3 am BBQ that proceeded the show and decided to skip the next days house show and take in some of the delights of Sydney.

There is more to the journey but in the spirit of brevity I will shorthand it for you. Went to Copacabana to visit Callum’s aunt and uncle, who were amazing. Stayed at Southwest Rocks. Ate a few more amazing big breakfasts and drove about 1000kms.

In the end, after a couple of meltdowns, I had a great time.