It’s been awhile. But I thought I should probably try and tell some people about some up coming shows.

Got some cheap flights to Melbourne and some people were nice enough to help me book shows so I will be playing at the following.

I’m really looking forward to both shows. Hopefully I’m not sick when they happen, Kellie got sick they day before we left.

I might also play the open mic at the drunken poet tomorrow night as it’s just down the road.

An upcoming show and a past show

Coming up this Sunday, Callum, Nick and I will be playing at Black Bear Lodge with some great Melbourne bands, have a look. Here. We will be playing a set of unrealised songs that will make up the majority of the next album.

Also a couple of months back I played a solo set at The Bearded Lady and Josh Watson was nice enough to play part of it on his 4zzz Radio show Live Delay. Listen below.

Album Launch and Another Show

Its about time that I provide an update on the album launch and another show.

Its taken some time to sort out, but we will be launching the Curlew album at the Bearded Lady on Sunday 16 November.

Yes, this is the last day of the G20, yes its probably not the best and easiest date to launch an album. But I must admit I forgot.

I had original booked the launch for November 20. However the Bearded Lady had a request from a Greek band for that date. I wanted to help the venue out, as Cat the booking agent has been lovely to deal with, so I agreed to change our date. As circumstances changed, that band had to pull out and Cat was nice enough to suggest I play a solo show on that date.

Don’t worry to much about the G20, come out and see us play, it might take a touch more time to get there, but you might see Putin or Obama wonder in for a beer, who knows.

So the upcoming shows are as follows. 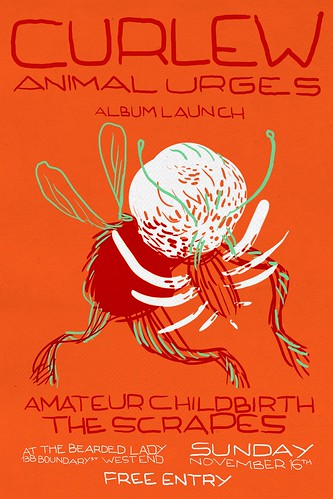 Thanks heaps for the poster Julien, you’re the best 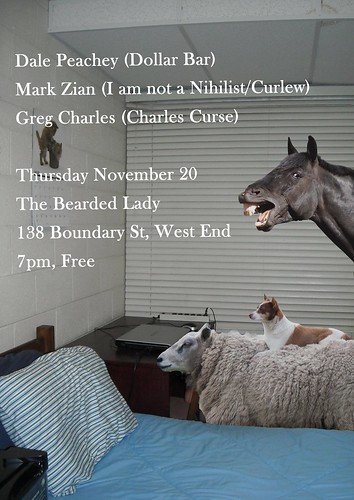 Thank you to Kellie for this poster.

I am really excited about both shows. The Curlew show will be like old times, just Callum and myself playing some songs from the album. For the solo show I will playing a mixture of I am not a Nihilist songs, some solo guitar stuff and a couple of newer songs that we have been working on for the next Curlew release.

As Nick is going away for a month for work we did some quick demos of the new songs, just in case he forgets his parts. Here is one of them.

Some News and A poem

Callum has returned from Japan, so tomorrow we will start practicing songs to start recording a new album, this time with Nick on bass. All of the new songs are really short, so it’s going to be a bit different for us, which is always a good thing.

In other news our album launch for Animal Urges will be on 20 November at the Bearded Lady, with guests Amateur Childbirth and The Scrapes. The album is already online, mainly because I hate sitting on things, but thought it would be good for us to launch it. Facebook events and posters etc are still to come.

Here is a poem just because.

When I worked in an Australiana tourist store

My boss showed me the new souvenirs she had ordered

But the thing she was most excited about was this fake bronze clock,

‘I hope you didn’t order many’ I said ‘Who would buy these?’

‘I ordered two boxes’ she said

and sold them all within the week

So now every time I wonder

if my opinion is right or not

I think of that bronze clock

“Personal interaction is of vanishing significance”

I rarely update this blog.

The reason I am writing this is because, as I was fixing a Hannah Montana guitar which I picked up from Lifeline, my lovely girlfriend called me to say goodnight, after which she told me through text message to update my blog. Mmmm technology.

There is news I guess.

Curlew has some more songs, were are trying to record them, we have played shows. Below are some results. A video of Fitness First from the Zoo. Thanks Nick. A studio recording of Cobwebs. Thanks David. A live video of Callus. Thanks Josh.

Curlew go into the Studio

Curlew have a 10 hour recording session tomorrow thanks to the amazing David Browne. This should be the start of our first album as a band.

We also have a gig this week at the Waiting Room with Heart Flew.

Im going to bed, I will update very soon.

Today marks a first for adding a date to my event calendar and also using my mailing list.

Music promotion is not really why I got into music, but people coming to shows is very important for the following reasons.

Therefore come to my gigs and drink a lot. I personally don’t really drink much and don’t really condone the consumption of copious amounts of alcohol, unless of course it makes me look good.

So long story short the details are:

Curlew play at the Zoo (funny yeah, animals at the Zoo, ha ha ha) Dad Joke, not actually a joke my Dad made but you get it.

Costs $6 presale or $8 on the door. (I have some tickets, but really the cost of contacting me then arrange payment is probably worth just coming on the night and surprising me . Alternatively you could surprise me and buy a ticket and not come)

The address is 711 Ann Street, Fortitude Valley and we play at 8 on the dot. (We will play our best song first so if you miss it, well yeah)

Proof reading is for pussies